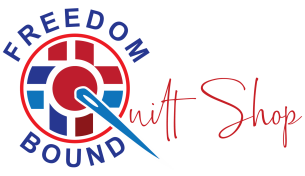 Lacy Spurgeon
Disabled Veteran, Lacy Spurgeon, is the owner of Freedom Bound Quilt Shop. In 2008, Lacy enlisted into the Military. She graduated from BCT/AIT, June 25, 2009. In October 2009, she was deployed to Egypt, where she was sexually assaulted by a colleague. In 2011, she was physically injured during a training accident and suffered a back injury. Due to this injury, she moved home, to Ohio. For the next 5 years, Lacy dealt with the effects of Post-Traumatic Stress and the aftermath of her injuries. She was eventually given a disability rating from the VA, where she was treated and continued to work on her recovery. 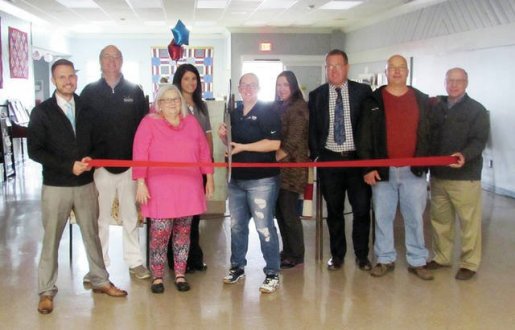 In 2016, after 5 years of depression, anxiety, and stress, Lacy began attending a quilt group in Archbold, Ohio. Once she started learning to quilt, she bought her own sewing machine, and used quilting, at home, to aid in her recovery. Quilting became an alternative form of therapy, although she didn’t forego her other therapy, but she wanted to share her new-found spirit for life, with other Veterans. When a nonprofit program, to teach Veterans how to sew, was unsuccessful, Lacy became aware of the need to have a quilt shop in her area. She decided to join the Semper Fi Fund’s Apprenticeship Program and learned everything she needed to know about owning a business. With the help of The Semper Fi Fund and their loyal donors, Freedom Bound Quilt Shop was formed, and doors opened October 12, 2017. In order to use this shop to give back to the community, Lacy created a space in her shop to allow Veterans and Spouses/Caregivers of Veterans to sell hand-made items.

We hold a wide variety of classes, which are free for Veterans, along with long-arm and domestic quilting services, Embroidery services, KimberBell Embroidery classes and coming soon Embroidery Klub. We participate in the Itty Bitty Shop Hop, Quilts of Valor, and we hold Sip ‘n Sew (Second Thursday of the month) and Lock-ins (first Friday of the month).

There have been many changes in the shop and with the addition of Lacy’s new business partner, AnnMarie Reynolds, we have been able to grow the business immensely. In the future, Lacy hopes to create jobs for local Veterans and continue to support the community and programs for Veterans. Her dream is to one day open a textile factory, to bring those jobs back to the USA, and employ even more Veterans.

AnnMarie Reynolds is native to Chicago, Illinois; she was the 5th generation to grow up there. She worked in investigations at the Bolingbrook Police Department, in Illinois, for 20 years and then as 9-1-1 Director for 19 years. She was responsible for opening two 9-1-1 Public Safety Answering Points and answered the first 9-1-1 call of new center. After her retirement, and her husband’s subsequent passing, Annie moved to Wauseon, Ohio to be close to her mother, brother, and niece.

Annie learned to sewing at the age of 10 on her grandmother’s treadle sewing machine, making barbie clothes. She learned how to crochet, cross-stitch, and needlepoint. In high school, she made her own clothes and began doing bridal work, making christening outfits from bride’s wedding gowns. She started making 18” doll clothes for her nieces and embellished the clothes with machine embroidery designs, then transferred that to making quilts with machine embroidery. She then attended a Jenny Haskins Certified Instructor Academy and began teaching. Not only did she make beautiful award winning quilts, but she learned to long-arm quilt as well. Her long-time friend Sue taught her how to long-arm on her manual Nolting Machine, and where she discovered a new love and dream to have her own long-arm.

After moving to Ohio, Annie and her mom drove by the newly opened shop and turned around to come in. She came into the shop every week for a year and that’s when she became a co-owner. In 2019, she bought a Handi Quilter Amara Long-arm Quilting Machine and has been the shop’s quilter ever since.

“I love being a part of Freedom Bound, working on the long-arm and teaching classes. As I tell our customers --- our shop is a work in progress. We look forward to learning new techniques, teaching classes, meeting new customers, and getting ideas for all the beautiful new fabric we get in.”